Day 4: A Conversation about Gender Violence in Graduate School 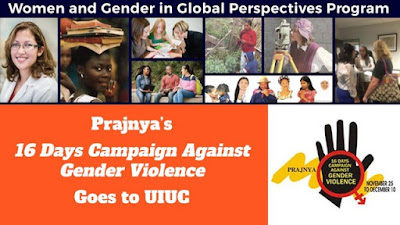 While the public reckoning over issues of gender-based violence and discrimination on university campuses has increased over the past few years, it has rarely focused specifically on the experience of graduate students. Pursuing postgraduate schooling such as master’s and doctoral degrees, graduate students get specialized training to access particular professions such as medicine or law, conduct research in labs, work as teaching assistants or course instructors, and so on. Their position between bachelor’s students and faculty members results in a unique set of challenges when it comes to the impact of gender on their campus-related experiences. 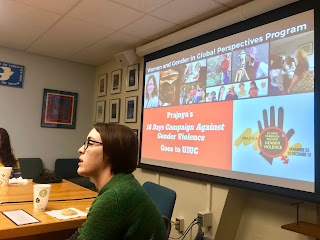 This Wednesday, November 28, 2018, the Women and Gender in Global Perspectives Program (WGGP) at the University of Illinois at Urbana-Champaign (UIUC) hosted an event titled A Conversation about Gender Violence in Graduate School, as part of an ongoing satellite campaign to Prajnya’s 16 Days Campaign Against Gender Violence on the UIUC campus. Prajnya’s founder and Managing Trustee Dr. Swarna Rajagopalan herself pursued graduate school and earned her PhD at UIUC, and it was in Urbana that she initially laid the groundwork for creating the organization. As current grad students in her very same program, we were excited to take her up on the suggestion of bringing the 16 Days Campaign Against Gender Violence to UIUC.
In the context of the growing awareness of gender-based violence and discrimination on university campuses, this event allowed us to focus specifically on the circumstances of graduate students. These circumstances are important for a number of reasons. First, graduate students are involved in a unique set of power dynamics: they can hold positions of power over undergraduate students, as teaching assistants or instructors, while also serving as a one of the first points of contact for undergrads when they themselves experience discrimination or violence on campus. The interactions between graduate students also include various power structures, especially when they involve more junior and more senior graduate students. Furthermore, graduate students work closely among each other, often forming close relationships that span being colleagues, friends, mentors, and sometimes being romantically involved. Lastly, they interact with faculty members in a variety of ways: as advisees, employees, colleagues, or co-authors on research projects. Faculty members thus hold varying degrees of control over a graduate student’s professional life and future career––by virtue of assigning her grades, advising her work, collaborating on research, writing recommendation letters, and so on.

Secondly, graduate students who face gender-based discrimination or violence are in a unique position due to the tight-knit nature of many academic departments and disciplines. Especially for those who wish to pursue a career in academia, it is crucial to maintain a good reputation in their discipline’s circles and not to alienate any gatekeeper of future professional opportunities. Therefore, the stakes for coming forward or speaking out can be high; and accountability for perpetrators, particularly those in senior positions, can be low.
Lastly, these issues intersect with other aspects of a graduate student’s identity in consequential ways. First-generation students with little exposure to the norms and implicit practices of academia might not have a good sense of what the relationship with one’s advisor should look like, for example. International students coming from academic backgrounds in countries other than the United States might have different expectations about the hierarchical structure of a department. Students of color and LGBT students might have a difficult time seeing themselves represented in the composition of their departments and disciplines, and experience discrimination not just on the basis of gender, but also on the basis of other components of their identity—often in combination with each other. 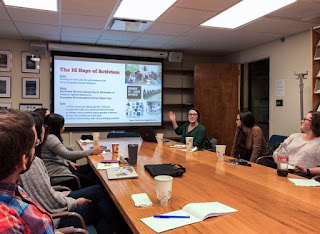 In addition to shedding light on these dynamics, this event provided an opportunity for graduate students from different disciplines to connect and discuss the commonalities in how gender impacts our experiences in graduate school, the University resources which we have found useful, as well as the additional resources that we would like to see be made available and the community and campus culture that we want to help build. Sarah Colomé, the Director of the Women’s Resource Center at the University, and Anita Kaiser, the Assistant Director of WGGP, also joined the event to provide their own perspectives on the resources and tools available to graduate students when facing gender-based violence and discrimination.
Altogether, the conversation highlighted many more similarities in the attendees’ experiences than it did differences: from the types of behaviors grad students are subjected to, to the shared fears and concerns regarding speaking out, to the challenge of striking a balance between academic responsibilities and the time-consuming and emotional work required to keep fighting for cultural change. Beyond recognizing similar experiences, the discussion was empowering. It not only pointed out institutional resources available at the University but also ways to build relationships with fellow grad students across departments to push for change both within and outside of our own academic circles. By the end of the event, it was clear that this was only the first of a series of conversations about gender-based violence and discrimination among graduate students––at UIUC and beyond.
Posted by Swarna Rajagopalan at 5:06:00 PM