Day 4: Scripting Presence: A Scriptwriting Workshop by Dr. A. Mangai 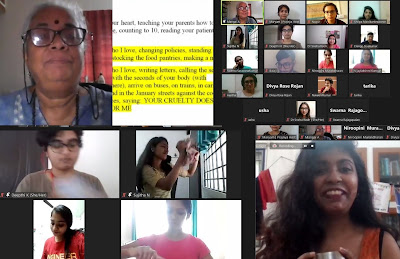 Our Campaign partnership with Marappachi dates back to the very first Campaign in 2008 and we were thrilled to renew it this year with a script-writing workshop. The impetus came from our initial quest to add a street theatre event to the Calendar but since we have always prioritised process and skill-building over events, this was the perfect replacement for that idea.

On Sunday, November 28, Dr. Mangai and about 18 participants spent three hours developing and performing micro-scripts (blogger's word!) of five lines each. They started with an observation exercise, then moved on to a group discussion. Following a short break, we were enthralled by the performance by Sadhashi of an excerpt from Marappachi's forthcoming play, "Ulluram." Participants then settled into the serious business of writing short scripts around prompts that Dr. Mangai provided. They drew on their discussions and their observations of each other. The session ended with a group reading from a beautiful poem.

Too short, too short, but the workshop was still impactful and for some, a transformational morning.